one is silver and the other gold... 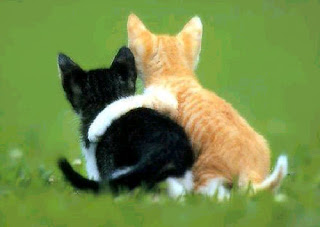 ...make new friends and keep the old. So goes the song, at least. Making friends is something I seem to do without trying, and I love it. I love having a posse. I'm not even a particularly outgoing or interesting person, but I seem to collect interesting people the way some people collect those naked little troll dolls.
Anyway, I recently threw a birthday party for my daughter, inviting two 'old' friends and one 'new'. It was really a revelation to me, for two reasons:
1. I am a totally different person in different social situations, and it is never so obvious as when I try to 'blend' friends from different settings. At school, where New Friend met me, I am edgy, sarcastic, and brainy. I dress in trendy clothes and make fun of things. My California coastal accent creeps back. My homeschooling friends, on the other hand, usually see me with kids, and thus they see the quieter, gentler Emily. The one who wears long skirts and talks in grammatically correct sentences. I never realized I encompassed these two very different Emily's until I was standing at my daughter's party at a total loss as to how to act. Is this normal? Maybe it is a reaction to the stark contrast between an academic setting and a more kid-friendly environment.
2. At some point, Mrs. Hannigan and Mrs. March, along with a handful of others, became 'old friends'. There was a point when my group of friends in Redding were the 'old friends' and the homeschooling mommies were nice people I hang out with because my friends are so far away. However, now they are not just friends, but 'old' friends. (Notice the quotes--none of you need Botox or anything. That's not what I mean by 'old'.) Anyway, I've became close to a handful of really cool women here, despite the fact that we never see each other and we have very different backgrounds.
This brings up interesting questions. What makes someone an 'old friend'? Is it going through trauma?--those of you who have been reading here for a while know what I mean by that. Is it that they are interesting enough that I wonder how they are doing even when we don't see each other? Who knows. I'm probably the luckiest person on the planet when it comes to meeting awesome people.
The other question: with student Emily being so different from mommy Emily, both of which are different from career chick Emily, what will Dr. Emily be like? How many more personalities do I have lurking in there?

Posted by Emily the Great and Terrible at 8:00 AM